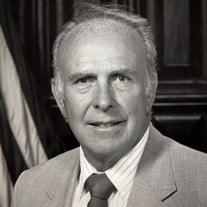 Wilford Lorin James passed away peacefully on March 7, 2021, in his home in Logan, Utah, surrounded by his loving family. Wilf was born February 12, 1930, in Logan, Utah to Heber George and Jennie Bradley James. He was the youngest of 5 sons. After attending Logan High School, Wilf enlisted in the United States Army. It was while in the Army that he received training to become a typewriter repairman. This launched his successful career at Hill Air Force Base. In the Spring of 1951, he met Colleen Egan at a dance in Hyrum, Utah. After dancing a couple of times, Wilf asked if he could drive her home. They fell in love and he proposed on the way to the Rodeo at the County Fair. They were married on September 20, 1952. Their marriage was solemnized on April 7, 1957 in the Logan Temple. Wilf and Colleen spent their lives together in Logan, Utah. Wilf was a loving, devoted father to 3 children. Wilf was called as a Bishop in The Church of Jesus Christ of Latter-day Saints when he was 33 years old. He oversaw the building of the old 23rd Ward Stake Center on Center Street. Wilf spoke fondly of his 9+ years that he served as Bishop. As his children grew up, Wilf enjoyed spending time with them. Wilf coached Little League Football for several years and led his team to the Little League Super Bowl victory. Wilf also brought joy to children at Christmas time, as he dressed up as Santa. He loved playing Santa for ward parties, neighbors and family gatherings. Wilf’s life changed drastically in 1980, when Colleen unexpectedly passed away. After a couple of years as a bachelor, he was set up on a blind date with Ann Heiner on February 28, 1982. They began a beautiful relationship that led to them getting married on August 6, 1983. Their marriage was solemnized on April 6, 1985 in the Salt Lake City Temple. After 37 years of marriage, Ann is so grateful for her relationship with Wilf. Even with combining families, there was always an overwhelming feeling of support and acceptance. Wilf enjoyed fishing, golfing and spending time with his family. Wilf and Ann served in the Logan Temple as Temple Workers for 14 years. He was a loving grandpa and always had a story to tell and a song to sing. Wilf is survived by his wife, Ann; his 5 children, Brenda S. (David) Larsen of Henderson, Nevada, Douglas W. (Laurel) James of Centerville, Utah, Michael B. (Kristy) James of Keaau, Hawaii, Lesa (David) Dean of Teasdale, Utah and Shellee (Steve) Brown of Winfield, Kansas. He is survived by 19 grandchildren and 51 great-grandchildren (and counting). He was preceded in death by his wife, Colleen; his parents; and his 4 brothers: Daniel J. (Eva) Kirby, Henry A. (Joyce) James, Donald H. (Maxine) James, and Ralph B. (Cori) James. Wilf’s family would like to thank the doctors, health care professionals and angelic hospice workers for their kind and loving care of Wilf. Funeral services are under the direction of Allen-Hall Mortuary and will take place Saturday, March 20, 2021 at the Mt. Logan Stake Center, 650 East 100 South in Logan, beginning at 11am with a viewing prior from 9:30 to 10:30am. Interment will take place in the Richmond City Cemetery with Military Honors. Services will be livestreamed and may be viewed via the following link: https://us02web.zoom.us/j/83202005530?pwd=YmdSb2xlUTBKTThtNjRWWkthQVZKdz09 Password: James

Wilford Lorin James passed away peacefully on March 7, 2021, in his home in Logan, Utah, surrounded by his loving family. Wilf was born February 12, 1930, in Logan, Utah to Heber George and Jennie Bradley James. He was the youngest of 5 sons.... View Obituary & Service Information

Send flowers to the James family.