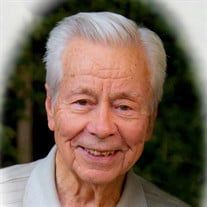 William Walter Jordan Jr. (Bill) passed peacefully from this life to reunite and celebrate with his sweetheart and eternal companion Marie, sons Bill and Dave and many other loved ones on Wednesday, September 15, 2021. Bill was a much beloved dad, grandfather, brother, uncle, cousin and friend, with a great sense of humor and a deep love for his Heavenly Father and his family. Bill was born in Akron, Ohio on July 27th, 1921 to William Walter Jordan and Elsie Frances Hollomon. During the depression years, his family moved to Mason Hall, Tennessee, to be closer to extended family. There Bill developed a life-long love of country living. Four years later, they returned to Akron and it was there, while attending North High School, that Bill first saw Jocie Marie Duncan (Marie), the love of his life! Bill and Marie were married Christmas Eve 1942 while Bill was on his final leave from the Army before shipping overseas. He then served over three years in North Africa, Italy, France, England and Germany during WWII. They celebrated 76 years together before Marie passed away in May 2020. After the war, Bill earned a degree in mechanical engineering from the University of Akron which led to several successful careers including many years with B.F. Goodrich, The National Highway Safety Bureau and, later in life, in hospital and nursing home administration. In 1956, while Bill and Marie were still unpacking from a move to Whittier, California, missionaries from the Church of Jesus Christ of Latter-day Saints knocked on their door and forever changed their lives. On June 29, 1957, Bill and Marie were baptized. They were sealed for eternity in the Los Angeles Temple on September 17, 1958. Bill was a devoted and faithful member of the church who served as Branch President, Bishop and missionary numerous times and diligently served in many other callings. He and Marie especially loved serving as Nursery leaders in the Primary. Though small in stature, Bill was a giant of a man who influenced many over the course of his life. He loved dancing with Marie, planting enormous gardens, working out at the Sports Academy, and arm wrestling (anyone who was willing!) well into his 90's. Bill is survived by 5 of his 7 children: Linda (Wayne) Jeffrey, Laurie (Alan) Gibby, Pam (John) Johnson, Jimmy (Ruthie) Jordan, and Julie (Blair) Buswell and by 36 grandchildren, 68 great grandchildren, and 1 great, great grandchild. He was preceded in death by his adored wife Marie, his parents and two sisters Dixie Gwendolyn (who died at birth) and Betty Barbara Jordan Wohlhutter. Bill also had an older half sister, Dorothy Jordan, whom he never met but he is, undoubtedly, getting to know with great excitement now! He was also preceded in death by his sons William Walter Jordan III (Marlys) and Robert David Jordan, one grandson William Nephi Johnson and two great grandsons Gabriel Benjamin and Reese Aaron Jordan. Knowing that Bill was not going to be with us much longer, a celebration of his life was held in conjunction with his 100th birthday. Then, almost all of his family (many of whom came great distances) and a few close friends were able to attend. Bill's grave will be dedicated in a quiet, close family gathering on Wednesday, September 22. The family expresses deep gratitude to the staff at Sunshine Terrace in Logan, Utah, who cared for Bill with great tenderness in the final years of his life.

William Walter Jordan Jr. (Bill) passed peacefully from this life to reunite and celebrate with his sweetheart and eternal companion Marie, sons Bill and Dave and many other loved ones on Wednesday, September 15, 2021. Bill was a much beloved... View Obituary & Service Information

The family of William "Bill" Walter Jordan Jr. created this Life Tributes page to make it easy to share your memories.

Send flowers to the Jordan family.