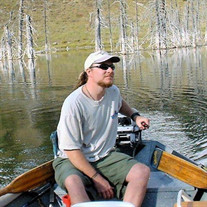 William Max Johnson Jr. {Billy} passed away October 26th 2021 in Roosevelt Utah after a long battle with Rheumatoid Arthritis. He was born March 4th 1972 to William Max Johnson and Kristine Phillips Johnson of Logan Utah. He is the eldest of two children. Billy attended Logan City schools and graduated from Logan High. He attended Utah State and was a member of Sigma Chi fraternity. Billy loved the outdoors and spent his early childhood with his family and friends hunting and fly fishing in the mountains and rivers of northern Utah. As a youngster he excelled at baseball where he was a pitcher. He was an accomplished skier spending countless wonderful days skiing with his family at Beaver Mountain. He loved golf, but was never able to beat his Mother! One of his favorite past times was rowing a drift boat down Henry's Fork in Island park where most of the time he out fished his Father. Bill Cook , Billy's Godfather, spent many hours teaching Billy how to bow hunt. "Pal", as Bill was called, also spent many hours teaching the kids how to misbehave... There were also many years when close friends and our family would meet at the Little Sahara Sand Dunes for a weekend of dirt bike riding. Billy, at a very early age, was riding a big bore bike through the expanse of the rolling southern sand dunes. Billy was previously married to Deb Morrow and out of this union they brought three wonderful children into our lives. : Elijah Max, Tristan Robert, and Gabe Johnson. His boy's were his greatest love and source of joy. Billy was an accomplished guitar player. Billy and his Mother found great joy in playing duets on piano and guitar. His Grandpa "Bob" Phillips was Billy's hero. He was shot down over Germany and became a POW . Billy wanted to know everything about his time as a POW. He collected anything that belonged to his Grandpa that reflected those times. Billy is survived by his parents, brother David of Logan, sons Eli, Tristan of Logan and Gabe, Livingston, Mt. His Aunt Kathy and Aunt Elyse will miss him greatly as will all of his uncles and aunts. We are so grateful for Margaret Chatwin for loving and supporting Billy during the time he lived in Roosevelt . We think of Margaret as an angel. All friends and family are invited to join us for a Celebration of Life to be held Friday, November the 5th at Logan Golf and Country Club, at 12:00 noon. Be prepared to tell a story of your adventures with Billy. In lieu of flowers we suggest a contribution to the Alzheimer's. Billy helped care for his Grandmother that suffered this horrific disease. Condolences may be expressed online at www.allenmortuaries.net

William Max Johnson Jr. {Billy} passed away October 26th 2021 in Roosevelt Utah after a long battle with Rheumatoid Arthritis. He was born March 4th 1972 to William Max Johnson and Kristine Phillips Johnson of Logan Utah. He is the eldest... View Obituary & Service Information

The family of William (Billy) Max Johnson Jr. created this Life Tributes page to make it easy to share your memories.