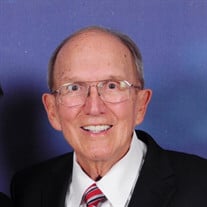 William Isaac Fletcher (Bill) passed away peacefully at home October 7, after multiple visits from loved ones. Bill was born April, 11 1938 to George “Ike” and Florence “Peg” Fletcher in Wyoming. He has one older sister Georjean, currently living in Oregon. Bill loved growing up in the rural oil fields of Wyoming. He graduated from high school in Rock Springs in 1955. He then continued his education by attending Weber State College and Utah State University where he earned a bachelor degree in Math and Physics. He earned a masters in Electric Engineering and pursued a doctorate at UC Berkley. He returned to Utah to teach at Utah State University, where he received 11 teaching awards and wrote a textbook that was used in the Electrical Engineering curriculum for many years and is still on the Prentice-Hall’s list of classic textbooks. He started his own electrical engineering consulting firm, Design Analysis Associates, in the late 70’s, where he consulted with the US government and international companies as a world renown engineer. He continued as a dedicated, successful, celebrated business owner until he sold his company in 2010. Bill spent his retirement traveling with his family and creating priceless memories with his grandchildren thanks to Walt Disney. Bill married Margaret Gensler in 1961. They had six children, Terrell, Saesha, Alisa, Krista, Andra, and Bid. They were later divorced. He met Kathy Zollinger at Utah State University. They were married July 2, 1981 and were sealed June 12, 2004 in the Logan LDS Temple. They had one daughter Cayli Ann. In 1999, they adopted longtime family friend, Ed Buist, as their own. Bill became a member of the Church of Jesus Christ of Latter-day Saints in 1959. He later converted his parent, sister, and first wife. He served in many callings, including his favorite calling which was serving in the bishopric of the YSA 29th ward at USU. During his work-related travel, he made many friends and developed a love of cooking, particularly southern BBQ. He loved sharing and perfecting his talents in the kitchen. He loved being outdoors, whether it was shooting clay pigeons, gardening, or pretending to be a cattle rancher. He was an avid reader and a student of history. He was preceded in death by his parents, a daughter-in-law, and a granddaughter. He is survived by his wife, Kathy, 8 children, 26, grandchildren, and 5 great grandchildren. Public viewings will be held at Allen-Hall Mortuary, 34 East Center Street Logan, Utah on Sunday October 11th, 6-8pm and on Monday October 12th from 10am-11:30am at the Mendon Church house, 20 N 100 W Mendon. Funeral services will be Monday October 12th beginning at 12pm at the Mendon Church House by invitation only for close family and friends. Services may be livestreamed via the following link: https://us02web.zoom.us/j/87596389593?pwd=ZlhuNFB4dUYrTjRWNFZUMmdqQkF5Zz09 PASSWORD: Fletcher

Send flowers to the Fletcher family.