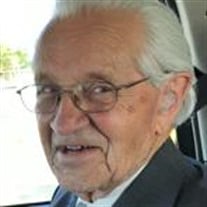 William Follett Reeder was born on April 14, 1928 in Hyde Park, Utah. The youngest son of George Leo Reeder and May Follett Reeder. He was the youngest of 5 children with his mother passing away when he was only 6 months old. He was then blessed with 4 younger half-siblings. He married Lamoyne Laurence on May 20, 1946 in Logan, Utah. They had five children. Laurence, David, Sheryl, Clint, and Marti. They were later divorced. He married Ruth Pack Tarbet July 3, 1973, they were later sealed in the Ogden Temple. They lived in Illinois, California, and then in Farmington, Utah with his love, Ruth. He enjoyed horses, horseback riding, his pasture, guns and shooting, hunting many different kinds of game with family & friends, but loved nothing more than his wife, children, grandchildren, great grandchildren, extended family and dear friends. He had an outstanding career as a Dairy Computer Technician with Klenzade/Ecoblab, and various dairies prior to that. He retired with distinction and the love and respect of his colleagues in 1993. His first purchase post retirement was a Harley Davidson motorcycle for some mountain riding with his love. That didn’t last long, but he stayed busy making bullets, shooting guns, making custom guns, shooting in gun matches, riding horses and shoeing his horse up to the age of 90. His family has the best memories of him sharing his love for all those things down at the pasture, and down in the gun room at his home that will never be forgotten. He made new friends everywhere he went including up until the very moment he passed in the hospital as he moved on to the next life to be with his loved ones. Bill and Ruth were the best grandparents you could ever ask for, and they are both so missed already by his family that this life will not be the same for any of us without them. He passed away February 27, 2020, in his 92nd year. He is survived by Larry (Betsy)Reeder, David Reeder, Sher (Dennis) Lancaster, Clint (Christy) Reeder, Marti (Robert) Hedge, Brian (Mary) Tarbet, Leanne (Jim) Everton. He has 38 grandchildren, and 89 great-grandchildren, and 1 great-great Grandchild. He was preceded by death by his wife Ruth Reeder, his parents Leo George Reeder and May Follett Reeder, siblings Nathan, Grant, Gwen, Josephine, and Russell, step-son Stephen Tarbet, and daughter in-law Barbara. The viewing will be Tuesday, morning, March 3rd at 10:00 in the Farmington Stake Center, 695 South 200 East, Farmington, Utah, 84025. The funeral will begin at 12:00. The interment will be at the Hyde Park Cemetery in Cache Valley, Utah.

William Follett Reeder was born on April 14, 1928 in Hyde Park, Utah. The youngest son of George Leo Reeder and May Follett Reeder. He was the youngest of 5 children with his mother passing away when he was only 6 months old. He was then blessed... View Obituary & Service Information

The family of William Follett Reeder created this Life Tributes page to make it easy to share your memories.

Send flowers to the Reeder family.