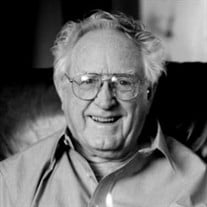 William Robert Thornley passed away Tuesday, March 10, 2020 at Maple Springs in North Logan, Utah. He was just shy of his 92nd birthday. He was born March 27, 1928 in Smithfield Utah to W. Clark and Gladys W. Thornley. As a youth he participated in scouting and 4-H, winning a trip to the National 4-H Congress in Chicago for his gardening project. Robert served honorably in the Southern States Mission and upon his return he attended USU majoring in Dairy Science. He enlisted in the Army ROTC and served in the Korean War. He returned home and enrolled again at USU earning a Master’s Degree in Bacteriology. While working as a teaching assistant in a lab class he met Annette Anderson who would become his wife. They were married in the Logan Temple on July 31, 1957. Annette and Robert were the parents of six children. Robbie (deceased), Joan (Mike) Fullmer, Peggy (Richard) Elwood, Ken (Sondra) Thornley, Randal (Charlotte) Thornley, and Kathryn (Mike) Clark. Annette passed away in November 1981 of cancer. He navigated single parenthood for a number of years and then on Sept. 26, 1992 he was blessed to marry Velda Mae Egan. She has truly been an anchor and support for him and both of their families. She has cared for, encouraged, nudged, taught and loved him for 27 years. Velda’s children, Trina (John) Wollen, Darrell (Annette) Egan, Terri (Lynn) Maughan, Teresa (Stew) Nielsen, Tess (Paul) Hulet, Dan Egan, Trudy (Brad) Carlson and their families put their arms around him and welcomed him into their families. He enjoyed many wonderful times with them and loved them as his own. Robert and Velda were mission companions and enjoyed their service in the Dublin, Ireland Mission. Robert served in many capacities in the Church of Jesus Christ of Latter-Day Saints. He loved teaching the youth in Primary, ministering to others and his service as a Temple officiator in the Logan Temple. Our dad was an inventor by nature. Whether in employment or leisure, he was most happy when experimenting, inventing, trying out a new goal or working on a new project. He ended his career as a Bacteriologist with the USDA Plant lab at USU. He founded the companies Heritage Glass and Thornley Processes LLC and created an Oral History Foundation named after his parents. He was part of a Utah delegation to Russia to promote Utah businesses and trade and while there made lifelong friends. Robert is a beloved husband, father, grandfather, great-grandfather, uncle and brother. His descendants are many, a combined forty-seven grandchildren, seventy-two grandchildren, one great-great grandchild and his influence has extended across the country and world to many others who love him. He is survived by his family listed above, his brother W. Ray Thornley and many nieces and nephews. The family is grateful for the wonderful care he received from his hospice staff, especially his nurse Holly Egbert and the care of the staff at Maple Springs. Funeral Services will be Monday, March 16, at 12:00p.m. in the North Logan 2nd Ward Chapel, 1105 East 2100 North in North Logan, with a viewing prior from 10:30-11:30 a.m. He will be buried in the Smithfield Cemetery. Condolences may be expressed online at www.allenmortuaries.net This link is provided for those who would be interested in an audio of the funeral if attendance isn't possible and to share condolences and memories. https://www.facebook.com/pages/category/Personal-Blog/Robert-Thornley-Memorial-103749951258003/ In our efforts to be good global citizens to bring our gathering size within government recommendations and to be proactive in protecting those that may be most vulnerable, we ask that everyone follow recommended practices of no hugs, handshakes or fist bumps, but greet with a head nod or elbow bump. In addition, where it makes sense please consider your own health if you are vulnerable or have been to at risk places as to whether you participate in person or electronically through the Robert Thornley Memorial Facebook page.

William Robert Thornley passed away Tuesday, March 10, 2020 at Maple Springs in North Logan, Utah. He was just shy of his 92nd birthday. He was born March 27, 1928 in Smithfield Utah to W. Clark and Gladys W. Thornley. As a youth he participated... View Obituary & Service Information

The family of William Robert Thornley created this Life Tributes page to make it easy to share your memories.

Send flowers to the Thornley family.