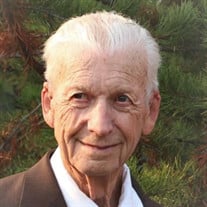 Alva Paul Howell (84) of Nibley, Utah passed away on November 1, 2021 at the Logan Regional Hospital from what his doctor called, and he loved to quote, TMB (Too Many Birthdays). Paul was born in Brigham City, Utah on November 5, 1936 to Alva Goldwin Howell and Carmen Rose Baird Howell. He grew up in Portage, Utah with his two brothers Larry Lee and John Cecil, and graduated from Bear River High School in 1955. Having lost their mom at a young age, he and his brothers proved to be resourceful in supporting themselves. He learned valuable skills such as hard work, ability to fix and improve anything mechanical, and to never take anything or anyone for granted. He further improved those skills working on helicopters while serving in the Air Force from 1955 to 1959. Paul held a variety of roles throughout his working years. Early on, he worked at Thiokol for a number of years. After some time, he secured a position at Boeing where he proudly worked on their Aircraft on Ground team, which involved traveling across the world repairing airplanes that were damaged in service. His longest tenure was with E.A. Miller as a truck driver where he worked for 25 years with over 3 million safely traveled miles. After retiring from driving, he enjoyed keeping his skills sharp maintaining rental properties with his wife and son, Greg, around Logan, Utah. The focus of Paul's life was his family. He met, Beverly Jean Tubbs, the love of his life in 1960 and made her his eternal companion when they were sealed as husband and wife in the Logan, Utah Temple on November 30, 1961. Shortly after, they began their family which grew to five children, ten grandchildren and one great-grandson. They were his pride and joy and the primary focus of his life. He was fully dedicated to his faith in Jesus Christ and always accepted whatever calling he was asked to do, including serving at the temple, service mission at the cannery, and helping with the boy scouts at Cinnamon Creek Campground. He filled his free time by helping others, tinkering in his shed and loved a good game of cards with family to wrap up the day. Among other interests, he loved listening to music—particularly country music (he always had a song for any occasion), he even wrote music, listening to audiobooks, talking about and investigating his genealogy, and gardening. In addition to his wife Beverly, Paul is survived by his children: Gregory Howell (Sharon), Paula Grzenia (Steven), Tyler Howell (Christie), and Jean Howell, grandchildren: Makayla Howell, Landon Howell, Ashlee Howell, Cameron Howell, Joel Davis (Casey), Stephanie Grzenia, Hailey Wood (Casey), Aubrey Howell, Wyatt Howell. and Brooke Howell, and great-grandson: Lucas Wood. He was preceded in passing by son Anthony Paul Howell. The funeral service will be held at the LDS Church at 360 W 3200 S, Nibley, UT 84321 on Saturday, November 6, 2021 at 1:00pm with a viewing prior from 11:30am-12:30pm. A viewing will also be held at Allen-Hall Mortuary, 34 East Center Street in Logan on Friday, November 5 between 6 and 8pm. Condolences may be expressed online at www.allenmortuaries.net Funeral service will be livestreamed and can be viewed via the following link (password: Howell): https://us02web.zoom.us/j/81125834217?pwd=QzhiWEEyRVdmdWJVMDNDYXI1TXgzdz09 If you were not able to view the funeral live, you may watch a recorded version here: https://www.allenmortuaries.net/obituaries/Alva-Howell/#!/PhotosVideos

Alva Paul Howell (84) of Nibley, Utah passed away on November 1, 2021 at the Logan Regional Hospital from what his doctor called, and he loved to quote, TMB (Too Many Birthdays). Paul was born in Brigham City, Utah on November 5, 1936 to Alva... View Obituary & Service Information

Alva Paul Howell (84) of Nibley, Utah passed away on November...

Send flowers to the Howell family.