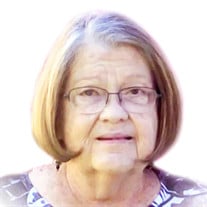 Ann Buttars, 72, of North Logan, Utah, passed away September 9, 2021, at the University of Utah Medical Center in Salt Lake City following complications of surgery and a lifetime of diabetes. Ann was our beloved sister, aunt, friend, neighbor, and the first person we called when we needed information for a term paper or school project. She could cover a wide range of topics, from Cache Valley and early Mormon history to the chemical properties in food and medicine, with a bit of proper grammar thrown in for good measure. She was born April 15, 1949, the second daughter of Asael Melvin and Maurine Buxton Buttars. At age 3, she was diagnosed with diabetes and along with her older sister, Marilyn, the family began waging an enduring battle against the disease. She attended Lewiston Elementary and North Cache Junior High, and in 1967 she graduated from Sky View High School as part of the first class who attended all three years at the newly built school. She continued her education at Utah State University, earning bachelor’s and master’s degrees in home economics. Ann had a lifelong love of books and supported herself in college working at the Merrill Library. Forty-six years later, she retired from USU after having worked as a cataloger, curator and onetime department head of Special Collections and Archives, where she enjoyed working with the university’s Utah and Mormon history collections. She loved interacting with students while holding the skull of the legendary grizzly Old Ephriam, or a first edition of the Book of Mormon, and helping people discover and document their genealogy. In 1973, she was diagnosed with end-stage kidney failure and began traveling to Salt Lake City every other day for dialysis since there were no options of this kind in Cache Valley. As a result, Ann became an early adopter of new medical treatments and developments. Kidney transplants were fairly novel to Utah when Ann received her first cadaver donation in 1974. It failed a few weeks later when a blood clot broke loose. A second kidney came along in 1975, and Ann extended its lifespan to 17 years with a pancreas transplant in 1986 that allowed her to live without insulin shots for the first time in many years. To avoid going back on dialysis, Ann received a third kidney transplant from her sister Lori. Grateful for the gift, Ann diligently maintained a regimen that would extend the life of the kidney, and although other aspects of her health were failing, it was still going strong 29 years later at the time of her passing. Ann had an innate and abiding faith in The Church of Jesus Christ of Latter-day Saints and was an example of strength and determination to many. She loved growing up on a farm next to her cousins in Cornish and later living next to her neighbors in North Logan. She loved entertaining – and being entertained by — her nine nieces and nephews and 24 great-nieces and great-nephews. She is survived by her sisters: Janet Garn, of Providence; Barbara and husband Dan Weston, of River Heights; and Lori Buttars, of West Bountiful. Funeral services are at 11 a.m. on Wednesday, September 15, 2021, at the North Logan 1st Ward, 1105 E. 2100 North. Friends may call at 9:30 a.m. for one hour prior to services. At Ann’s request, there will be no evening viewing. She will be buried next to her parents in the Smithfield City Cemetery. The family would like to thank the many sweet friends, neighbors and cousins who made it a point to call, take her to doctor appointments, bring her food and stop by for a visit. In her honor, Ann would be thrilled if you signed up to be an organ donor, grew a garden, planted more flowers or took someone to lunch. TO VIEW THE FUNERAL LIVE, click on the following link: https://us02web.zoom.us/j/82797870360?pwd=ei9rTC9lTUJ5bG9IRFg0elRFNDF5QT09 Password: Ann If you were not able to watch the funeral live, then you can find it here: https://www.allenmortuaries.net/obituaries/Ann-Buttars/#!/PhotosVideos

The family of Ann Buttars created this Life Tributes page to make it easy to share your memories.

Send flowers to the Buttars family.