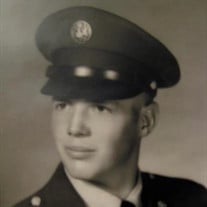 In the early morning hours of August 26th, 2021, our sweet father and husband Dean Meacham, peacefully joined his Heavenly Father. Dean was born February 9th, 1940 at home, to his parents Elvin Meacham and Ora Mae Hubbard Meacham in Lago, Idaho. He was the fourth of ten children. He graduated from Grace High School Class of 1958, in Grace, Idaho. Later, he joined the Army National Guard. He served a mission in 1961 to 1963 in the East Central States Mission. He served in Tennessee, West Virginia, Western Kentucky, then transferred to his favorite place.. Morehead, Kentucky where he had many baptisms. His favorite baptism was Roberta Anne Hosack or Berti. After his mission, Dean and Berti were married in the Ashlyn, Kentucky Chapel on June 5th, 1963. They moved to Lago, Idaho and sealed in the Logan Temple of the Church of Jesus Christ of Latter day Saints. Dean worked on the family farm in Lago. They then moved to Smithfield, Utah where he worked for a cattle buyer and they had their first child Kristi. Later, he was employed by Cream O’ Weber Dairy in Logan where they had their next 3 children Dawna, Gini, and David. He also attended Utah State University. Dean took a great interest in accounting and started his own successful business doing accounting and preparing small business income taxes. He was active in his church serving in the Stake Presidency as The Finance Clerk. He then served in the Bishopric as First Counselor. He was a Sunday school teacher, taught primary, and was a home teacher, but his favorite calling was nursery leader. He kept in contact and formed great friendships with his kids throughout the years. Dean loved his church and his country and was very dedicated to the Boy Scouts of America. He attended National Wood Badge Training for Adult Leaders. He also received his Silver Beaver Award and loved using these skills on many Father-Son outings. Dean was introduced to the theater through Berti, and became hooked. He performed in the Festival Of The American West for 30 years. He loved filming, and has miles of film footage of his daughters dancing and performing, his son’s soccer games, scout outings, and other family gatherings. He loved to garden and was a natural engineer and builder, creating a beautiful sanctuary in his backyard for his family and friends. He loved music and HATED reading. Dean’s greatest joy was his wife, family, and his cats . Dean is survived by his adoring wife Berti, and their four children; Kristi Boyce, Dawna (Damon Olsen), Gini (Stephen Teuscher) Meacham, and David (Heike) Meacham, and his 3 grandchildren; Austin Olsen, Grace Olsen, and Hope Olsen. In addition, he is survived by his 3 step-grandchildren, Alex, Rayne, and Ayla. He is busy preparing the fourth grandchild for his/her journey to this earth. Dean is also survived by his five siblings; Arlen Meacham, Joyce Kirby, Don Meacham, and Duane Meacham. Dean was greeted in heaven by his parents Elvin and Ora, and five of his siblings. Funeral services for Dean will be August 31st, 2021 from 11:00 to 12:00pm at the Park Avenue LDS Ward Chapel (3 Point Avenue, Logan, Utah). A viewing will be held one hour prior to the services at the same address. Interment will be at the Logan City Cemetery Logan, Utah. The family wishes to thank Allen-Hall Mortuary, Symbii Hospice, and Dr. Brian Carlson and his staff for the loving care of our husband and Father. To live stream the funeral services, click the following link (passcode: Dean): https://us02web.zoom.us/j/88411387407?pwd=dXRDNk5pc3RUc3BTc0t1YUF4Qmd1dz09 If you are unable to watch the live stream of the funeral services, a recording of the services will be uploaded to the following page on our site: https://www.allenmortuaries.net/obituaries/Dean-Meacham/#!/TributeWall Condolences may be shared at: www.allenmortuaries.com

Send flowers to the Meacham family.