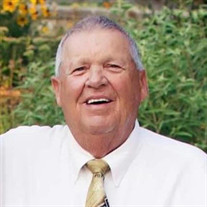 Dennis B. Udy passed away from respiratory failure on Friday, January 14, 2022 in the American Fork Hospital. He was surrounded by his wife and six children. Dennis was born in Logan, UT to Austin Udy and Mary Bailey Udy. He was the youngest of six children. He had two brothers and three sisters: Margaret (Ken) Hanni, John (Margaret) Udy, Joyce Weese, Doris (Steve) Foster and Dean (Julie) Udy. Dennis was raised on a farm in Riverside, UT. He graduated from Bear River High School, where he played football, basketball and baseball. Following high school, Dennis was recruited by Coach Sark Arslanian to play football at Dixie Junior College, where he played on the only undefeated team ever at the school. The team was inducted into the Dixie State Athletic Hall of Fame in 2013. He played two years of football, one year of basketball for Coach Doug Allred and one year of baseball. Dennis then continued to play baseball for three years at the University of Utah, after initially being offered a football scholarship. He met his wife Marilee Pectol while attending Dixie College. They were married in the St. George Temple on June 11, 1966. Shortly after, he was drafted by the Boston Red Sox organization, where he played in the minor leagues as a pitcher for two years. After graduating from the University of Utah in 1968, Dennis coached high school football and had many jobs in between, including working as a banker. He owned and operated a shoe store, the Foot Broker, in the Cache Valley Mall for many years, which drove the family’s move to Logan. Dennis also served as President and Founder of Cache Valley Pony League, president of American Legion North and was a scout for the Colorado Rockies for seven years. Dennis has loved baseball his whole life and started Rocky Mountain School of Baseball about 30 years ago. The inaugural year of Super League, a competitive league, comprised of fourteen teams. Now the league has grown to over 400 teams and about 5,000 players from Southern Idaho to Southern Utah. Teams participate in Super League, camps and tournaments. Two fundraising tournaments are held each year. Some of the proceeds have been donated to the ALS Foundation, the Kidney Dialysis Center in Logan and the Breast Cancer Foundation at Dixie Regional Hospital. In addition to being heavily involved in athletics, he was a great supporter of his family, who he loved very much. Much of his life was dedicated to supporting his wife, six children and fifteen grandchildren in their endeavors. He gave much of his time to helping them develop their talents and follow their dreams, including coaching countless teams they played on. Not only did he spend much of his life coaching his own children, he was known as “Coach” by many. He started and coached the Cache Wolverines and the Cache Valley Sox. In 2007, Dennis was one of 10 people in Cache Valley recognized by the Herald Journal for his years of service to the community. In 2013, Dennis was inducted into the Logan High School Baseball Hall of Fame. Dennis was also a great supporter of Dixie State University athletics and the Alumni Association. In 2018, he received a “Distinguished Alumni” award from Dixie State University for his leadership and support. Dennis is survived by his wife Marilee, his six children: Mike Udy (Tracy) of Hyrum, Utah, Matt Udy (Angie) of Idaho Falls, Idaho, Ryan Udy (Stephanie) of Franklin, Tennessee, Sommer Bingham (Morgan) of Lehi, Utah, Rhett Udy (Bobbie Jo) of Providence, Utah and Sonnet Udy of Lehi, Utah and fifteen grandchildren with a great grandchild due in March. Dennis was preceded in death by his parents, Austin and Mary Udy, his parents-in-law Lewis and Elaine Pectol, his sister, Margaret Hanni, his brother, Dean Udy, brothers-in-law, Ken Hanni, Steve Foster and Errol Pectol, a niece, Alisha Udy, a niece Kassie Lee and her son Jerym Lee. A viewing will be held on Friday, January 28, 2022 from 6:30-8:30 p.m. at the Allen-Hall Mortuary at 34 E. Center St. in Logan, Utah. There will also be a viewing on Saturday, January 29, 2022, from 10:00-11:30 a.m. at the Cache West Stake Center in Logan at 125 W. 600 N. Funeral services will follow at 12:00 p.m. Masks are encouraged. Interment will take place at the Logan Cemetery, 1000 N. 1200 E., following the funeral services. The family would like to thank the staff at the American Fork Hospital ICU for the compassionate care that was rendered. In lieu of flowers, donations may be given to the Susan G. Komen Breast Cancer Foundation at: https://www.komen.org/. You can view the funeral live on Saturday by clicking on the following link: https://us02web.zoom.us/j/89339343092?pwd=STZ2dEV3dGxIZDdHZFZwY2FCem5pdz09 (password: Dennis) If you were not able to watch the funeral live, you can watch a recording of it here: https://www.allenmortuaries.net/obituaries/Dennis-Udy/#!/PhotosVideos

Dennis B. Udy passed away from respiratory failure on Friday, January 14, 2022 in the American Fork Hospital. He was surrounded by his wife and six children. Dennis was born in Logan, UT to Austin Udy and Mary Bailey Udy. He was the youngest... View Obituary & Service Information

You can view the funeral live on Saturday by clicking on the following link: https://us02web.zoom.us/j/89339343092?pwd=STZ2dEV3dGxIZDdHZFZwY2FCem5pdz0

Dennis B. Udy passed away from respiratory failure on Friday,...

Send flowers to the Udy family.