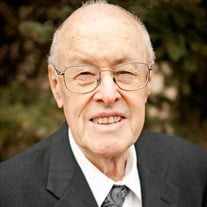 Donn Calvert Goode, 89, passed through the veil Monday, April 11, 2022. Born on June 15, 1932 in Santa Monica, California to Merla Ione Fewkes and Calvert Thomas Goode. He came to this life with a huge smile, a twinkle in his eye and a sense of humor that made him meet his challenges head on. Donn was the oldest of three boys, which he delighted in being the ring leader of practical jokes. Having gotten Polio at age 7 and missing first grade made it so he and his brother were bobsey-twins all through school. The closeness he shared with his mother and brothers was shattered when his mom came down with terminal cancer. At age 15, Donn was sent to Emmett, Idaho to live with Aunt Tessie and Uncle Ansel Rich. There he learned what hard work was, helping to run a farm and apple orchard. Here is also where he found a true father figure in Ansel, also a teaching of the gospel of The Church of Jesus Christ of Latter-day Saints. His love for the gospel grew. Because his older teen-aged years were during the Korean War, few missionaries were called. His path lead him to BYU. After spending a year there, he became anxious and curious as to what he would find up north. That summer, he spent, working with his brother Bob in Montana building Hungry Horse Dam. Leaving construction, his wanders brought him to Cache Valley. Here he had relatives, but most importantly, this is where he met his Eternal Sweetheart. Not without putting all his charm to work, she was won over and Mavis Noble became Mrs. Donn Goode March 16, 1953. The first few years of married life were spent in California with hard work. Their lives were blessed with three of their children during this time. Finally together Donn and Mavis made the decision that an education and better environment was needed for their family. Cache Valley became home. Here is where their fourth child joined them. Together as a family they worked hard to convert the house into their home. Donn went to school and work. Mavis ran the home, raised the children and gardens. Donn’s accomplishments grew. Space Dynamics Lab became home for his graphic skills. He joined as the eighth employee. They now employ well over 1,000. He loved his work and smiled with his successes. His most joy came from his family and the service in the gospel. He shared his testimony any chance he got; as he lived in the mission field, as a local missionary, working in the temple, and many callings in ward and stake. His last nine years have been spent lightening the lives around him, both in Caring Hearts and Autumn Care. Regardless of his pains, personal cares, or concerns he had a joke, smile or twinkle to lift someone else. Donn will be missed by many! He was preceded in death by his sweetheart, Mavis, one grandson and one great-granddaughter, his parents and both of his brothers. He is survived by his four children David (Barbara) Goode, Kavin (Gayle) Goode, Georgiann (Brent) Parkin, Craig (Carol) Goode, 24 grandchildren and 48 great-grandchildren, 2 sisters-in-law, Judy Goode and Sharlene Goode, and many nieces, nephews and cousins. Gratitude is extended to Autumn Care (especially Xochithl Frankman and Tammy Law) for the love, care and comfort shared with him. Funeral services will be held at Allen-Hall Mortuary, 34 East Center Street in Logan, Monday, April 18, 2022 beginning at 12 pm with a viewing prior from 10 to 11:30 am. Interment will take place in the Smithfield City Cemetery. In lieu of flowers, please make a donation to your favorite charity Condolences may be expressed online at www.allenmortuaries.net. Video tribute - click here Video recording of the funeral services - click here Audio recording of the funeral services - click here

Donn Calvert Goode, 89, passed through the veil Monday, April 11, 2022. Born on June 15, 1932 in Santa Monica, California to Merla Ione Fewkes and Calvert Thomas Goode. He came to this life with a huge smile, a twinkle in his eye and a sense... View Obituary & Service Information

Send flowers to the Goode family.