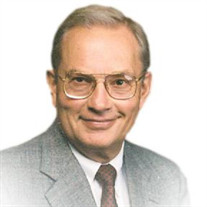 John Malcom McLeod, known to many as “Mac” beloved, husband, father, brother, grandfather, and great-grandfather left this life unexpectedly on March 6, 2022, at the age of 91. John was born October 15, 1930 in Breckenridge, Minnesota to Mildred Elizabeth Bailey and Nathanial F. McLeod. He spent his growing up years on a farm in Antelope Township, North Dakota with his siblings Mary Joyce, Dennis, Douglas, and Lewis. They all worked hard and learned many life lessons there. John attended elementary school at Antelope Cons. located in Barney, North Dakota. He attended Wyndmere High School in Wyndmere, North Dakota, graduating in 1948. Mac was an athlete and captained the football and basketball teams at Wyndmere High School during his last two years. He also played as a first baseman representing an amateur baseball team. John had a beautiful singing voice and participated in many musical competitions. John attended the University of North Dakota in Grand Forks, North Dakota where he graduated in 1957. He joined the United States Air Force March 10, 1951, and was honorably discharged as a Staff Sergeant January 17, 1955. John’s work history began with Summers Fertilizer Company in Grand Forks, North Dakota. He then moved on to the J. R. Simplot Company in Pocatello, Idaho where he earned the title of Vice President of Marketing. He worked for Simplot from 1963-1994. John married Clara Hammerback October 23, 1952 in Newton, Kansas. They had four children: Linda, Robert, Maribeth, and Scott. John and Clara divorced in 1968. John later married Mary Ann West May 14, 1983 in Pocatello, Idaho. Mary Ann had three children: Jolyn, Dana, and Brett to add to the family. John was a member of the Lions Club, Rotary Club, Toastmasters Club, in addition to the Fertilizer Industry state and national associations. He was always ready to serve his community in any way that he could. In John’s adult life golf became his love. He was a member of several country clubs in Pocatello, Idaho; Oro Valley, Arizona; St. George, Utah; and Logan, Utah. He made golfing look easy and was very dedicated to perfecting this sport. John was a member of the Lutheran Church and was very active in the church choir of the Prince of Peace Lutheran Church in Logan, Utah. John loved being around family and enjoyed supporting them in their various activities. For several years, as his health allowed, he was one of the biggest supporters of the Bear Lake Bears. He attended every baseball, football, and basketball game that he could. John was preceded in death by his parents Nathanial and Mildred, one brother Lewis McLeod, his son Scott McLeod, and son-in-law Doug Hackett. He is survived by his wife Mary Ann, children: Linda McLeod, Robert and Nichole McLeod, Maribeth and Doug (deceased) Hackett, Gregg and Jolyn Knutti, Brett and Dana Rae Jacobsen, and Brett and Chris Parker. Siblings; Mary Joyce and Robert Breuer, Dennis and Mary Beth McLeod, Douglas and Susan McLeod. John had 15 grandchildren and 14 great-grandchildren. He was dearly loved by all. As you walk down the fairways of life, you must smell the roses, for you only get to play one round. John, “Mac” McLeod played his like a master. At this time services are pending for a later date. Interment will be in the Paris, Idaho Cemetery. In lieu of flowers, memorial gifts in John’s name should be given to the Prince of Peace Lutheran Church in Logan, Utah. The graveside service was recorded and can be found by clicking here

John Malcom McLeod, known to many as &#8220;Mac&#8221; beloved, husband, father, brother, grandfather, and great-grandfather left this life unexpectedly on March 6, 2022, at the age of 91. John was born October 15, 1930 in Breckenridge, Minnesota... View Obituary & Service Information

The family of John "Mac" McLeod created this Life Tributes page to make it easy to share your memories.

John Malcom McLeod, known to many as “Mac” beloved, husband,...

Send flowers to the McLeod family.