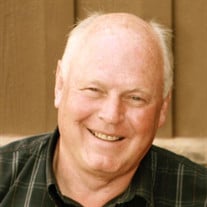 MarDell Criddle Parrish was a son, brother, uncle, husband, father, grandfather, friend and educator, but he was also an entrepreneur since age 8, and an “idea man.” He was known around the North Logan area as “the train man.” He spent countless hours going around neighborhoods giving rides to children, parents and grandparents and loving every minute. MarDell passed away April 20 at the age of 74 having put up a determined fight against cancer for almost 10 years. His bucket list included building a cabin in St. Charles for his posterity and sharing a grand 75th/65th birthday celebration with his younger sister Julie on May 31st. He did finish the cabin and almost made the birthday party. We have seen so many miracles and tender mercies over these 10 years including 10 new grandchildren. MarDell was the 3rd of 7 children born to Monroe Asa and Golda Criddle Parrish on May 31, 1946, in Ogden, UT. He graduated from Clearfield High School and served in the Berlin, North German Mission. He returned to his mission in 2018 with his son Myles where they were able to meet up with his first convert baptism who is now known as the music man of Hamburg (Dec. Ensign 2000). After his mission he attended Utah State University as a student. MarDell was involved in several organizations: Editor of USU’s student newspaper “The Statesman,” a member of blue key and the Editor of Blue Book, a student directory. He was in the ROTC and did basic training at Ft Benning, Georgia. After graduating from Utah State in Journalism and Language he was hired as the Associate Director of Alumni Relations at USU for 10 years. He then attended the University of British Columbia in Vancouver, Canada and completed a master’s degree in Administrative, Adult and Higher Education. He lived there with his family for 6 years. Coming back to USU he worked at the water lab as the Director of International Office for Water Education and traveled the state of Utah doing assemblies and workshops for elementary teachers. He was the Co-Creator and Director of the Young Artist Water Education Art Project. MarDell was also the Creator and Director of Engineering State and Junior Engineering State at USU. MarDell married Madelyn Lindsay in the Manti Utah Temple on August 29, 1969. They met while students at a USU leadership workshop held in the Grand Tetons at Colter Bay. They celebrated their 50th anniversary in Hawaii with all of their children and their spouses in 2019. They had 8 children who all started with the letter M. Marnie, Myles, Michelle, Mitchell, McKay, Melissa, Morgan and Micah. His entrepreneurial spirit loved creating job opportunities for his children. Some of these included, Parrish swim school, a turf farm, lawn care and landscaping business, and a secondary water company. He was a Member of the Church of Jesus Christ of Latter-day Saints and served in many callings including Elders Quorum and High Priest presidencies, in the Bishopric and as a Temple worker. He especially loved serving on the activities committees. As a youth he worked at Lagoon from the age of 15 until his mission. That started his desire to want to help people have FUN. That is what made him happy. He loved planning parties with as many people as possible, swimming in his pool, boating, 4-wheeling, train rides, bubbles, bottle rockets, singing, backhoe rides, helium balloons, taking family photos, blowing out and relighting the birthday candles, root beer and ice cream. He was a fun Dad and Grandpa and we will miss him! MarDell was preceded in death by his parents and his sister Darla Rampton. He is survived by his wife Madelyn Parrish and his children Marnie (Darrin) Wray, Myles (Dana) Parrish, Michelle (Eric) Dodson, Mitchell (Wendy) Parrish, McKay (Holly) Parrish, Melissa (Jon) Anderson, Morgan (Rachel) Parrish, Micah (Laura) Parrish and 40 grandchildren and 6 great-grandchildren as well as his siblings: Roger (Becky) Parrish, Margo (Joe) Anderson, VerDon (JoAnn) Parrish, Julie (Mark) Tensmeyer and Val (Allison) Parrish. Services are under the direction of Allen-Hall Mortuary. A viewing will take place Friday, April 30 at the church, 1650 East 2600 North in North Logan, from 6 to 8 p.m. Funeral services will take place Saturday, May 1, beginning at 12:00 p.m. with a viewing from 10:00 - 11:30 am at the LDS meetinghouse located at 1650 East 2600 North in North Logan. Interment will take place in the North Logan Memorial Park Cemetery. Services will be live streamed and may be viewed online by visiting www.allenmortuaries.net. To view the funeral live on Saturday at 12 p.m., click on the following link (password: Parrish): https://us02web.zoom.us/j/81525402912?pwd=T001cTVFYjRPUzJkUWNCRlJXeEpFUT09 If you were not able to see the funeral live, a zoom video recording of the funeral will be found here: https://www.allenmortuaries.net/obituaries/Mardell-Parrish/#!/PhotosVideos

MarDell Criddle Parrish was a son, brother, uncle, husband, father, grandfather, friend and educator, but he was also an entrepreneur since age 8, and an &#8220;idea man.&#8221; He was known around the North Logan area as &#8220;the train man.&#8221;... View Obituary & Service Information

The family of MarDell Criddle Parrish created this Life Tributes page to make it easy to share your memories.

Send flowers to the Parrish family.